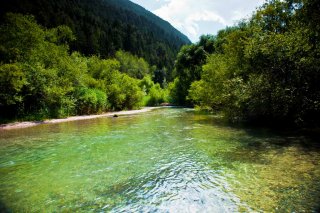 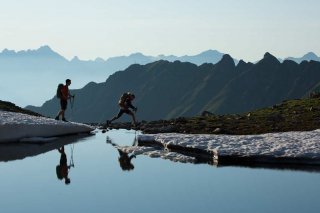 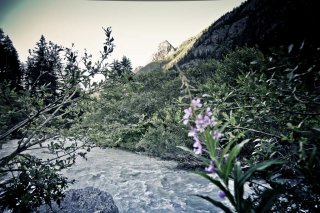 These eras were followed by the age of water in its liquid form in Pitztal. Starting below the Wildspitze peak – Tyrol’s highest mountain at 3,772 m – the two main streams flow in a northerly direction. The Taschachferner glacier – which was until recently the mightiest icefall in the Eastern Alps – and the Mittelbergferner glacier (“Ferner” means glacier in Austrian dialect) form the actual source of the Pitze river, also known as Pitzbach. Both merge below Mittelberg after the two power plant dams in Griestal and Taschachtal.

There are many waterfalls to admire as you head north out of the valley, which are fed by the tributaries of the Pitze river (including Lussbach Fall, Seebach Fall, Schützes Fall, Klockele Fall, Stuibenwasserfall, Pfitschebach Fall, to name but a few).

The water from the Pitztal spring has a very low mineral content. The “extremely soft water” has an ideal PH value. Contrary to popular opinion, the fewer minerals there are in water, the better it is for your health. This is because water with a low mineral content is better suited to cleansing the body as it has a much greater potential to absorb and flush out harmful substances. Toxins and waste products from the blood and connective tissue can be excreted gently.

Enjoy one of the most precious commodities and foodstuffs of our time, which has its origin in the region, the birthplace of quartz.

In affinity with nature